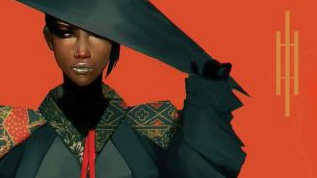 Some amazing artists got involved with this celebratory hashtag.

Social media is the place to be if you’re an artist looking to get involved with a community, share work and get noticed. The recent #DrawingWhileBlack tag aims to celebrate and show appreciation for black artists—and it’s gone viral.

Created by Twitter user Abelle (or, to use their frankly amazing handle @sparklyfawn), the rules for #DrawingWhileBlack are simple: You need to be black, you need to be an artist (of any level, this isn’t just for pros) and you need to share some images of your work and tweet them with the hashtag. Perhaps the most important rule is the last one: have fun.

The hashtag was originally meant to run from just September 15 through 17, but thanks to its amazing and well-deserved success, you can still find artists posting their work on Twitter.

Below are 10 sensational artists who contributed to #DrawingWhileBlack. And check out #Inktober, a collection of artistic creations on Twitter and Instagram. 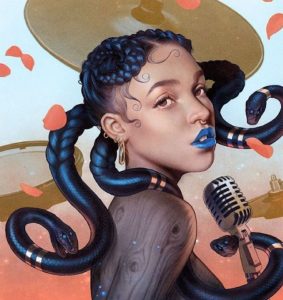 This amazing illustration of FKA twigs turns the musician into a medusa. Charles Chaisson is a freelance illustrator currently based in Brooklyn. Originally born in New Orleans, Louisiana, Chaisson moved to Florida to gain a B.F.A in illustration before heading to New York’s School of Visual Arts to receive an M.F.A.

Outside of academia, Chaisson reveals on his Twitter page that he’s a lover of science, nature, surrealism, science fiction, politics, social activism and dancing. These interests are plain to see in Chaisson’s work, which plays around with the boundaries between reality and imagination, such as his fantastical portrait of FKA twigs (above) which is complete with hair that morphs into snakes. 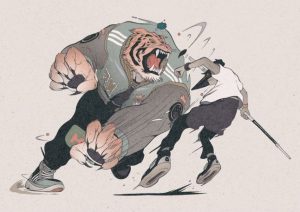 Isles’ work is crisp and precise but still packs a lot of movement. Not familiar with the name Daniel Isles? Perhaps you know the artist by his alias DirtyRobot. Based in Japan, Isles is an illustrator and comic artist whose gorgeously clear work incorporates plenty of original science fiction imagery – it’s not everyday you fight a tiger person in a bomber jacket after all.

Working chiefly with pencils and inks, Isles is a prolific artist who recently drew a picture every single day for a year. If you like the look of his work, you can even sponsor him on his Patreon page for the chance to win some original art. 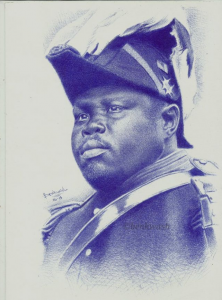 What do you do with a humble Bic pen? Scribble down notes and leave it to dry out by the phone (if you still even have a landline, that is…)

In the hands of Benjamin Kwashie, a Bic pen is a tool to create incredibly realistic artwork. The illustrator from Ghana kept things pretty humble with his #DrawingWhileBlack contribution, as he decided to let the images themselves do the talking. But with such ridiculous talent for a 20-year-old, we’re sure to hear more from him in the future. 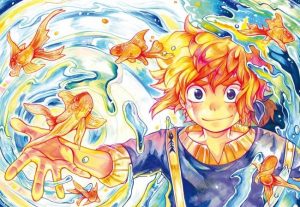 This fisher-boy character is the star of Nana Yaa’s very own manga. The talented Nana Yaa is an illustrator and mangaka from Germany who flits between full time and freelance work. As well as being an amazing artist with shonen publications under her belt, Yaa is also an author with her own manga volumes in the works.

The image above gives a sneak preview of what to expect from her Goldfisch manga, which is due to be released in January 2018. With a vibrant art style that blends colours skilfully, it’s sure to be an entertaining read 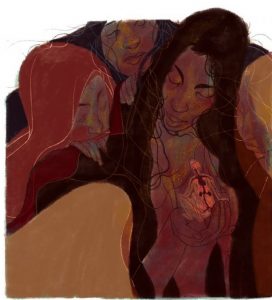 Xia Gordon is an illustrator and comic-artist currently based in Brooklyn, NYC. Having earned a BFA in Cartooning & Illustration in 2016, Gordon has gone on to work with publications including Lenny Letter, New York Times, and Narratively.

In her #DrawingWhileBlack Tweet, Gordon reveals that she has an interest in abstraction, figures and likeness. These interests play off one another, as seen in “The Women Contemplate Man” (above) to create beautiful, stylised work that’s like nothing else we’ve seen before. Gordon also has a Patreon you can contribute to if you want to help her create more work. 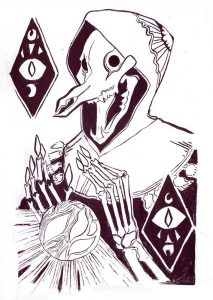 Laura Wilson loves to draw skeletons and dogs … or occasionally dog skeletons. Just like Benjamin Kwashie, Laura Wilson keeps it brief with her #DrawingWhileBlack contribution. The illustrator and animator from Texas found plenty of amazing artists through the Twitter tag so decided to join in the fun herself.

Tweeting “Hi I’m Laura I hang out and paint weird dogs,” gives us a quick insight into her sense of humour and subject matter. Working both in black and white and colour, Wilson creates fantastical illustrations that often see hounds and skulls taking centre stage. If you want to see more of Wilson’s work, be sure to check out her art in the fantasy anthology Poor Wayfaring Strangers Volume 1. 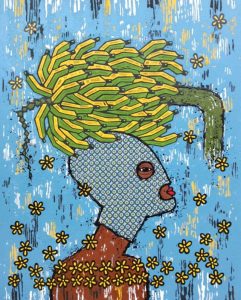 Just when you thing you’ve got #DrawingWhileBlack figured out, along comes this curve ball from Twitter user Dorothy Nabunjo. Instead of sharing her own artwork, she decided to share images by Xenson.

Also known as Samson Senkaba, Xenson is a multi media artist, fashion designer, contemporary and graffiti artist, and poet from Uganda. With a distinctive look that includes vivid colours and stylised subject shapes – see Mbasakidde (Are You Questioning My Hard Work?) above – we’re glad to have been exposed to the artist’s work through a hashtag. 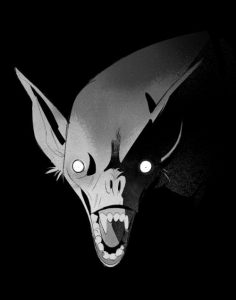 The shadows and eye lighting give this piece a great sense of depth. Jeanette Arroyo is a freelance artist skilled in creating character designs and layouts for animations. On her site she explains that she wants to “express my creative vision and meld into a team effort for the completion of innovative and creative productions.”

And with a charismatic and playful drawing style, we want to see more Arroyo collaborations, too! Capable of giving people, demons and animals characterful expressions, as well as being a master of colour and monotone art, the worlds Arroyo create look like an enchanting place to explore. If you’re won over by Arroyo’s art, be sure to support her supernatural comic Blackwater on Patreon. 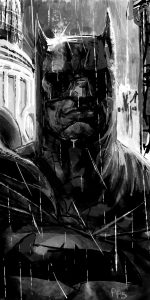 We could gaze at Paul Peart Smith’s detailed ink art for hours. He’s a bit late to the party, having posted his #DrawingWhileBlack Tweet a few days after the weekend, but we’ll let that slide because Paul Peart Smith’s art is so darn good. Originally from London, Smith now lives in Tasmania and creates outstanding ink illustrations.

As an artist, designer and cartoonist, Smith has worked on projects such as One Plus One, Junkyard song, Edge of Extinction and the upcoming Kanan. His art has a wonderfully loose style that still perfectly captures the essence of his subjects. Scroll through Smith’s art on his site. 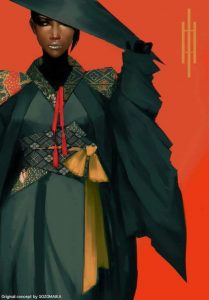 Self-taught SOZOMAIKA channels a love of fashion into her art. Specialising in both 2D and 3D art and design, SOZOMAIKA (the alias of Maika Sozo) is a self-employed artist based in NYC. Having begun painting digitally since she was 16, SOZOMAIKA is entirely self-taught and currently works as a character artist for Yuumei.

SOZOMAIKA’s main inspiration is fashion, having collected fashion magazines and books from a young age. This fascination is clear to see in her work, as characters are often adorned with desirable wardrobe choices. If you like SOZOMAIKA’s style you can order prints and pins from her shop, and you can even order commissions.