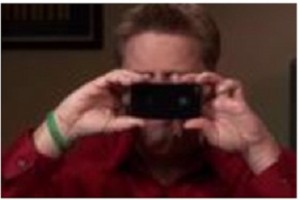 I tweeted this earlier, but it’s such a cool story I had to post it, too!

“It’s kinda fun for me, I’ve never had a camera before,” he says in video.

In the video, Edison explains how he uses Instagram to capture, edit, caption and share images he takes with Instagram. Even though he can’t see the images, Edison says he’s received some interesting comments on the ones he’s posted.

Using the “accessibility” feature on his iPhone, Edison can make it so Siri reads aloud everything he touches — from apps to filters to sharing things on social networks. This makes iPhones accessible for visually impaired individuals. He captions the images by using speech recognition.

Not all of the images he takes turn out well, but commenters let him know what they’re looking at in the comments. Plus, Edison seems to enjoy sharing snapshots of his daily life.

You can check out Edison’s Instagram feed a blindfilmcritic.

In addition to being Instagram-savvy, Edison also has a YouTube channel in which he talks about “the fun parts of being blind” and explains how he cooks for himself and other things.

There are a number of other apps for blind people. One handy app can identify what denomination of currency you’re holding, to prevent being ripped-off. Another app uses Foursquare data to help visually impaired people navigate the streets.