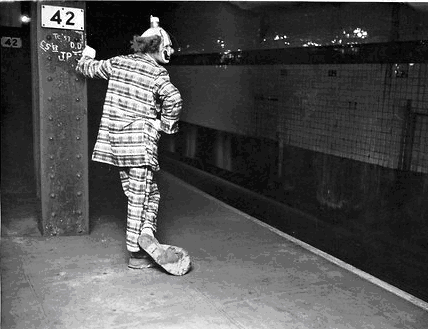 Allyn Baum/The New York Times
The New York City subway in 1958. After missing the Rockaway Express as it left Times Square, Jazzbo the clown waited for the next train.

I have been Jazzbo. You have been Jazzbo. We know exactly what he was thinking on that platform in 1958 because more than once we, too, have just missed a train at a time when it was the last thing in the world we needed. And the only fix is to grin and bear it and wait for the next one.

The New York Times’ City Room series, “Ask About Transportation in New York City,” has been answering questions from, as well as sharing pictures throughout the years of, various city commuters. As the image above proves, everyone rides the subway and everyone feels the pain of missing the train. Even Jazzbo.

Photographer Backstory –
Allyn Baum was a staff photographer for The New York Times from 1957 to 1967. In addition to his photography, Baum also worked as a writer and editor there. A native of Chicago, he was a journalism graduate of Northwestern University and started his career with International News Photos and United Press, based in Berlin, Frankfurt and Paris.

And what of circus clown and magician Jazzbo? Check him out.