Categories Menu
Home » Featured » Transcendental Meditation: Out of the Mouths of Babes

Transcendental Meditation: Out of the Mouths of Babes 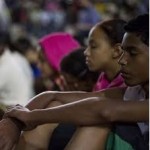 Students at the David Lynch Foundation

There is a very interesting video below about Transcendental  Meditation. Sixth- and seventh-graders talk about how it’s dramatically changed their lives.

Their stories about dealing with extreme levels of anxiety, stress and fear rattled me. It’s one thing tackling this stuff as an adult; it comes with the territory. But kids? And TM helped?

A few days after watching the video, I came across a New York Times op-ed piece about the pressures felt by many high school students who live in epicenters of over-achievement. One student in Palo Alto confessed to panic attacks in class, and missed menstrual periods as a result of exhaustion. “We are not teenagers,” she said. “We are lifeless bodies in a system that breeds competition, hatred, and discourages teamwork and genuine learning.” In recent years in the city, orange-vested men and women have started standing guard at railroad crossings because between May 2009 and January 2010 alone, five teenagers ended their lives by stepping in front of trains.

I thought again about the kids practicing TM.

Actress Judy Greer talked with a few of them at the Aspire Public School in L.A., part of the David Lynch Foundation’s Quiet Time Program.

One student told Judy, “I felt my worries going away, along with my anxiety. When you meditate, it takes out all the tension inside of you and it’s really calming.”

Out of the mouths of babes …

Over 4 million people around the world now practice TM daily, according to an article in The Guardian. Make that 4,000,001.

Other forms of meditation require a far greater commitment and can be more difficult to adopt. They teach either extreme concentration on one particular thing, or deep contemplation.

What makes TM so user-friendly is that you don’t have to do any of that. You don’t have to cross your legs, or be near water, or light a candle. It’s easy. And if you’ve got kids, it’s definitely worth their time. Just listen to the students at Aspire again. Listen to their parents.

10-20 minutes of quiet time using a mantra is recommended to liberate your mind from conscious thought and trigger the meditation. If you choose to use a mantra, it can be as basic as Ram if you’re a he, and Shiram if you’re a she.

That said, TM is about not doing. The magic’s not so much in the mantra, but in the effortlessness of the practice. Effort in meditation is self-defeating, like trying to turn a jar of muddy water clear by shaking and stirring it. If you just let it sit, the mud settles to the bottom and the water turns clear.

To quote Richard from Texas, in Elizabeth Gilbert’s Eat Pray Love, “If you sit down with the pure intention to meditate, what happens next is not your business.”