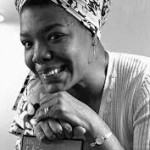 One of the many ways NPR is paying tribute to author, poet and memoirist Maya Angelou, who passed away on Wednesday, May 28, is this enlightening interview from 1986, when Ms. Angelou spoke with Fresh Air’s Terry Gross about what influenced her writing style.

Those influences were numerous and powerful. For some of us, insurmountable burdens. But not for Maya Angelou.

Please take a listen to this very beautiful and insightful conversation.

Transcript of Recorded Conversation:
Maya Angelou died today at the age of 86. We’re going to listen back to an interview with her.

In her six memoirs, she explored how race and gender affected her life. Her first memoir, “I Know Why The Caged Bird Sings,” was published in 1969 and described growing up in the segregated South. It included the story of how Angelo was raped by her mother’s boyfriend. After the rape, she withdrew into herself and went through a long period of not speaking. Maya Angelou got pregnant and became a mother when she was 16 and unmarried.

Her autobiographies described how she traveled around the country with her son Guy, earning her living as a waitress, prostitute, singer, actress and writer. In the ’60s, Angelou was active in the civil rights movement and worked with Martin Luther King as the northern coordinator for the Southern Christian Leadership Conference.

When she was 33, she moved with her son to West Africa, yearning for the sense of home she had been unable to find in America. In 1982, she became a professor of American studies at Wake Forest University. She was the inaugural poet for Bill Clinton when he took office in 1993. In 1986, she told me that she thought her writing style was influenced by southern African-American preaching and music traditions.

MAYA ANGELOU: I find in my poetry and prose the rhythms and imagery of the best – I mean, when I’m at my best – of the good Southern black preachers. The lyricism of the spirituals and the directness of gospel songs and the mystery of blues are in my music or in my poetry and prose or I missed everything. There’s a blues – I was just thinking when I said the mystery of blues – I hadn’t thought about that before. But there’s a 19th century blues, which asked this question – have you ever had the blues so bad you could feel them in the palm of your hands? Now that’s mystery. And that’s poetry. And that’s what I try for.

GROSS: Did you grow up going to church a lot…

GROSS: …And listen to a lot of blues?

ANGELOU: In a long meter hymn, a singer – they call it lays out a line. And then the whole church joins in in repeating that line. And they form a wall of harmony so tight, you can’t wedge a pin between it. So that a person would soon (singing) as long as I live and troubles rise, I’ll hasten to his throne. Then everybody comes in. If I was there, I would sing, (singing) as long as I live. And then there are all these twists and turns and melodic accidents, harmonics and accidental harmonics which take place which just are delicious to the ear.

GROSS: Are there poems that influenced you when you were starting to write or that made you want to write?

ANGELOU: Oh, so many. There’s a poem call “Sympathy” by Paul Laurence Dunbar. Mr. Dunbar wrote this about 1890. The first stanza is, I know what the caged bird feels – ah, me – when the sun is bright on the upland slopes; when the wind blows soft through the springing grass, and the river flows like a sheet of glass; when the first bird sings and the first bud opes, and the faint perfume from its chalice steals – I know what the caged bird feels.

Oh, dear. The whole poem is so beautiful. There are three versus to it.

GROSS: What else really influenced you?

ANGELOU: Well, Shakespeare – I was very influenced – still am -by Shakespeare. I couldn’t believe that a white man in the 16th century could so know my heart. If he could know my heart, a black woman in the 20th century, a single parent – all the things I was ere to – then obviously I could know a Chinese Mandarin’s heart and the heart of a young Jewish boy with braces on his teeth in Brooklyn.

It meant I could know – if he over those centuries could know me so that he could write, when in disgrace with fortune and men’s eyes, I all alone bemoan my outcast state and trouble a deaf heaven with my bootless cries and look upon myself and curse my fate, wishing me like to one more rich in hope, featured like him, like him with friends possessed and desiring this man’s art, that man’s scope, and with what I most enjoy contented least.

GROSS: When you were young you went through it period I think of several years of not speaking…

GROSS: Was it because of the rape?

ANGELOU: Well I think that I thought of myself as a giant ear.

ANGELOU: Like something of Gary Larson which could just absorb all sound. And I would go into a room and just eat up the sound. And I memorized so many poets. I just had sheaves of poetry, still do. I would listen to the accents and I still love the way human beings sound. There is no human sound which is unbeautiful to me. And so I’m able to learn languages because I really love the way people talk.

And when I was very young, blues singers used to come walking through the sound with cigar box guitars – really a cigar box on a piece of wood and cat gut strung along it – and they’d come around the store and sing. And the fellows from the Brazos of Texas had a sound which was absolutely Texan and they’d sing (singing inaudibly). Oh, it’s so gorgeous I could pull my hair out.

GROSS: Isn’t it amazing how the period of being mute probably in its own way helped you to become the writer that you are?

GROSS: How did you start to speak again after you stopped?

And when I was about eleven-and-a-half she said to me one day – I used to carry a tablet around on which I wrote answers -and she asked me, do you love poetry? So I wrote yes. It was a silly question for Mrs. Flower since she knew I just. She told me, you do not love poetry. You will never love it until you speak it. Until it comes across your tongue, through your teeth, over your lips, you will never love poetry. And I ran out of her house, I thought I’ll never go back there again. She was trying to take my friend.

She came to the store and she would catch me and say you do not love poetry. Not until you speak it. And finally I did take a book of poetry and I went under the house and tried to speak. And could.

GROSS: Did you have to find your own voice after those…

ANGELOU: Oh yes, and still I mean, for years I did. I didn’t even know where it was placed for that matter. And then I didn’t trust it. I was afraid. And I said this before but I was afraid it might leave, you see, since I had pushed it away so long, it might on its own just take off. And then mutinous is much like any other addiction, it stands just behind my eyesight, just behind my shoulder in critical moments when a marriage ended which I thought would never end. It stands there offering itself to me saying I’ve got something for you – come to me.

GROSS: It’s tempting to not speak?

GROSS: I guess hearing that from someone as eloquent as you makes it even harder to understand because you could use language to any effect.

ANGELOU: It’s so tempting that when I’m really in bad shape I sing, sing – and my mom and my son will find me wherever I am and stay with me and see me through that period because it’s there – it’s saying come. I can make life so simple for you. You’ll never have to explain anything again.

GROSS: When you went to Ghana, you were searching for a home but you left Ghana for about a year or so and went back to America. And you’ve lived where you are living now in North Carolina for a few years and you have a permanent position at a University there that you can keep as long as you want – it’s a lifetime professorship. Do you feel like you have your home now? Does that really feel like home or is part of you still searching for home?

GROSS: Maya Angelou recorded in 1986. She died today at the age of 86 in her home in Winston-Salem.

Copyright © 2014 NPR. All rights reserved. This transcript is provided for personal, noncommercial use only, pursuant to our Terms of Use. Any other use requires NPR’s prior permission. Visit our permissions page for further information. NPR transcripts are created on a rush deadline by a contractor for NPR, and accuracy and availability may vary. This text may not be in its final form and may be updated or revised in the future. Please be aware that the authoritative record of NPR’s programming is the audio.8Comment