Essence of a Groove 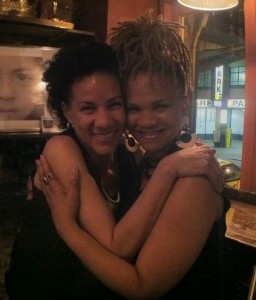 That’s her on the right – Gha’il Rhodes Benjamin. She has “sizzle.” We met two years ago at my best friend’s wedding and I’ve been smitten ever since.

Her sizzle is felt and seen the moment she enters your presence, whether on television, stage or the radio, behind a podium or in front of a classroom. She’s an award-winning actor, songstress, poet, spoken word recording artist, self-empowerment speaker and teacher. These are but a few of her credentials.

Gha’il is also the owner and creative director of Talking Poems and Storytelling Productions, specializing in amazing poetry that celebrates weddings, birthdays, anniversaries, home-goings and everything in between.

I spied her recently at the Cupping Room in SoHo where she vocalized soulful, improvised grooves with the band Zoe Lyons & Company.

Wow! That was a powerful set. You are a master at improvisation. How do you do it? Where do you go mentally and emotionally?
I do the moment. I go with what’s being established. Tonight, when I was on stage with the bass player, I connected with what he was already creating and synchronized. It became like a third energy between the two of us. It started out as a rhythm that we both were familiar with, but it took off to someplace unknown and we just went along for the ride, girl! 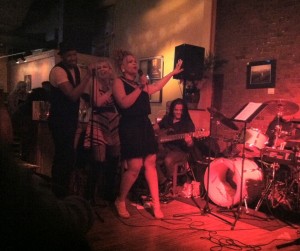 Have you performed with Zoe & Company before?
Zoe and I are like sisters. We were at a spiritual workshop retreat in CT in 2006. We ended up being roommates and, although we knew each other through church, that workshop was when we bonded. Since then we’ve been building our repertoire through song, through music.

Elton John has said that we can affect people by the emotion in our voices. You do that. You exude so much emotion and so much energy when you’re on stage. At the end of a gig, are you energized or exhausted?
Ha! I’m both. Really though, usually I’m some place on a high level of having lived where I’m supposed to live at the moment. This is what I was born to do. This is why I feel so good and why people have responded the way they have. I am exactly where I am supposed to be, doing my life’s work. 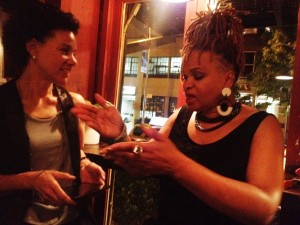 Earlier tonight when we were talking, you said that you escort people into the flow of their own creativity. How do you do that?
All I do is take your hand and walk with you through the open door. Everybody is walking toward their success. Sometimes you take a fork in the road and you’ve got to rearrange. See, flow of our creative energy comes from different places. What we do know is that positive reinforcement has to be present all the time. Sometimes panic stimulates creativity. Did you know that? But when the panic sets in, you stop. You fear. So when I see that in someone, I just take their hand and keep them moving forward through the door.

What’s something people would be surprised to learn about you?
Ha! As super energetic and on-the-go as I am, I love a late-afternoon nap, like … for hours, okay? And that on any given night, I might dance until the sun comes up, then I’ll have a little breakfast and do whatever needs to be done that day.

When you’re not performing, how do you spend your time? 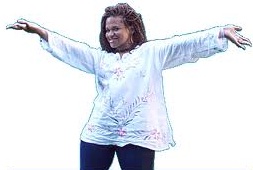 What’s on your nightstand?
I just finished Shapeshifting, by John Perkins, and Dying to Be Me, by Anita Moorjani.

Self-empowerment. If there was one thing you could get people to recognize within themselves, what would it be?
That each one of us is unique and experiences the same moment differently and it’s okay. We don’t have to fight about who’s right. How boring it would be if we all looked alike, sang alike, thought alike. Variation is to be cherished and honored and enjoyed.

What’s next on your horizon?
I just finished a role in “Raisin in the Sun” at Drew University in November. I plan to go kayaking! And I plan to watch the sun set at a beach as often as possible before I go into the studio again for my next CD. I don’t know where that beach will be, but I know I will enjoy every minute! 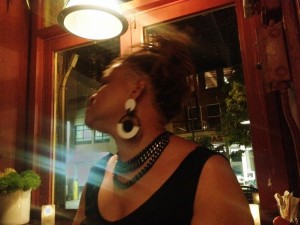 Check out the sizzle that is Gha’il Rhodes Benjamin. As soon as you arrive, you’ll be greeted with a delicious audio sampling of her art. Visit her Facebook page to discover more.

Her debut CD, Spiritual Eclipse/ Sacred Moments on a String of Words, is a collage of music and spoken-word, a portrait of self-discovery, self-love and renewal.